Clermont SWCD continues to adjust to the changes required to combat COVID-19. As of February 2021, Clermont SWCD offices and others at the Agricultural Resource Center in the County Fairgrounds remain closed to the public. Staff are rotating the days during which they work in the office, and are available to make site visits any time during regular business hours (M-F, 8 to 4:30). Visits to the District office may be made by appointment only. To schedule an appointment, email our staff or call (513) 732-7075. Upon arrival for your appointment, please come to our walk-up window located to the right side of the main entrance to the Ag Center. Masks should be worn by anyone visiting the office or meeting with staff off-site.

The Clermont SWCD Board of Supervisors typically meet on the 2nd Wednesday of each month at 8:00 a.m. at the District’s office on the Clermont County Fairgrounds. The next Board meeting will be held on Wednesday, March 10, 2021 at 8 a.m. in the 4-H Hall at the Clermont County Fairgrounds (1000 Locust Street, Owensville). All are welcome to attend. Social distancing guidelines will be followed, and attendees are required to wear masks. Please call (513) 673-0177 for more details.

Please click here for a pdf of our Annual Report

Congrats to the Village of Williamsburg, recipient of the 2020 Cooperator of the Year award. On behalf of the Clermont SWCD Board of Supervisors and all of the East Fork Watershed Collaborative partners, we thank them for their dedication to protecting Clermont County’s resources https://t.co/TJd8YhJOkW 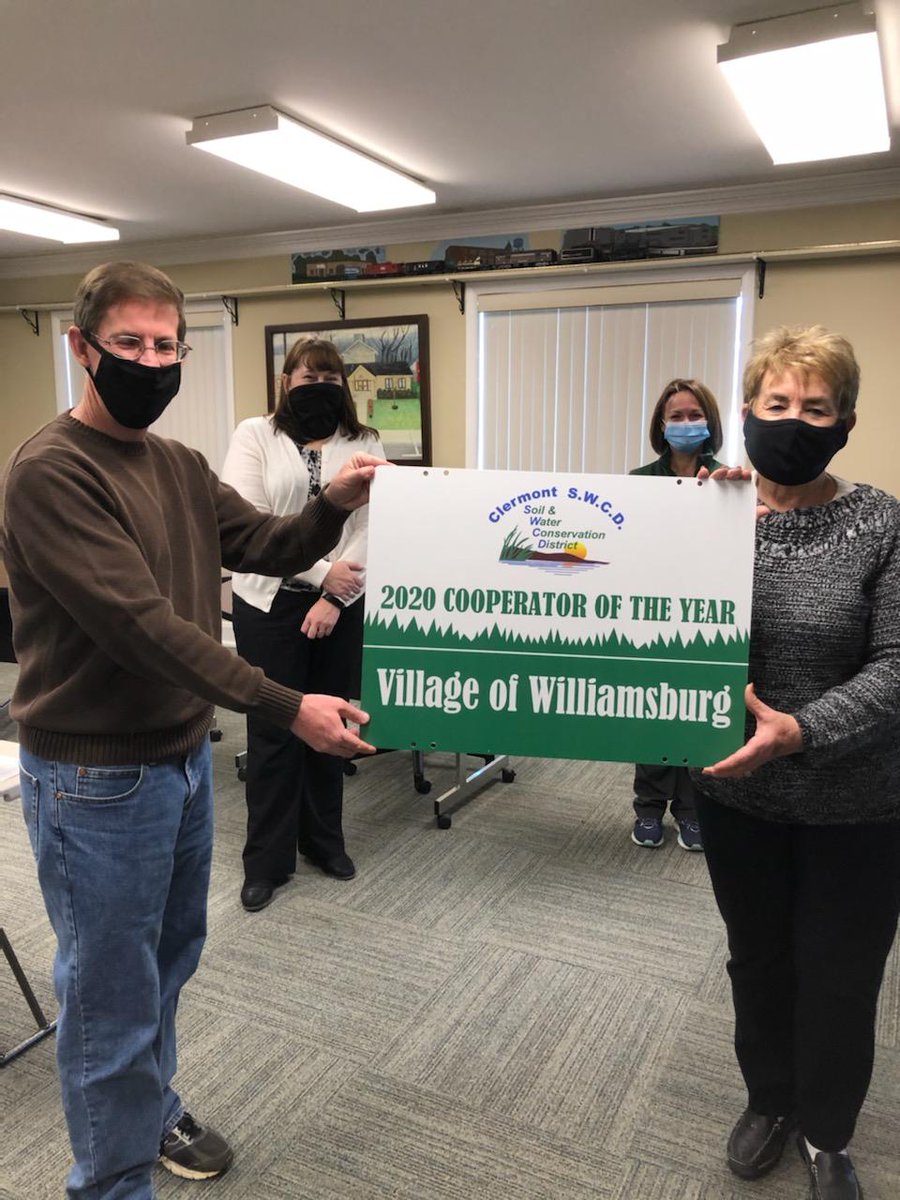 A great reminder to help reduce erosion and keep our outdoor spaces beautiful during the muddy weeks ahead! https://t.co/U6UyhMO4k1

View on Twitter
Great Parks of HC
@greatparks
Did you know that the best way to walk on a trail is often the dirtiest?

With so much snow melting, you are sure to see puddles and soggy trail conditions this week! Practice this @leavenotrace tip during your next hike – get muddy! https://t.co/ZdKFxvwnrh Dave Anspach grew up on the family farm in Owensville, where he and his wife Pam reside today. Dave’s family has always practiced conservation on the farm, and his father Ray was the District’s Outstanding Cooperator of the Year in 1977. Installed practices include a WASCOB, several drainage/ditching projects and utilizing no-till in their operation. About 100 acres are rotated in soybeans and corn on the 125 acre farm.

Dave has a B.S. degree in Business from Miami University, and worked for the Farm Credit Services Agency for 15 years before serving as Clermont SWCD’s Administrator from 1990-97. During his tenure with the SWCD, Dave helped oversee the development of a full-time education program and helped coordinate the development of the Agricultural Center complex and movement of the District offices to the fairgrounds facility in 1995.

Dave has served on the Clermont County Park Board for 22 years, during which time he helped plan and direct the development of the new Chilo Lock #34 Museum and Visitor Center.

In 2006, Dave rejoined the Clermont SWCD family as a Board Supervisor. He is now completing his fifth 3-year term on the SWCD Board. Additionally, Dave serves as the Secretary-Treasurer for the Ohio Federation of Soil & Water Conservation Districts. Dave states that he would like to continue to use his conservation background and experience to serve the community.

Scott Jennings is a lifetime resident of Felicity (Franklin Township) where he lives on a generational family farm with his wife, Jill and daughter, Erin in southern Clermont County. Scott has worked on the family farm of 400 acres since a young boy. He raises row crops, hay and has a 100 head beef production operation.

Scott has previously been a board member of the Farm Service Agency. He has worked with NRCS in prior years to construct fencing, develop natural spring watering for the cattle and numerous other waterway conservation measures. In 2008, he received the Cooperator of the Year award presented by Clermont Soil and Water Conservation District.

Tim Rose is a lifetime resident of Clermont County, and is the Third generation Rose to operate Ohio Pike Farms in Bethel. Together, Tim and his father farm nearly 1,000 acres of corn and soybeans rotating crops annually and practicing no-till planting. With the recent addition of grass filter strips through multiple fields, Tim continues to practice conservation on the farm.

Tim is a young farmer with big plans for caring for his land and positively impacting the community he lives in. Tim has dedicated his life to the farm and plans to pass his knowledge of agriculture and the industry onto his children as they grow.